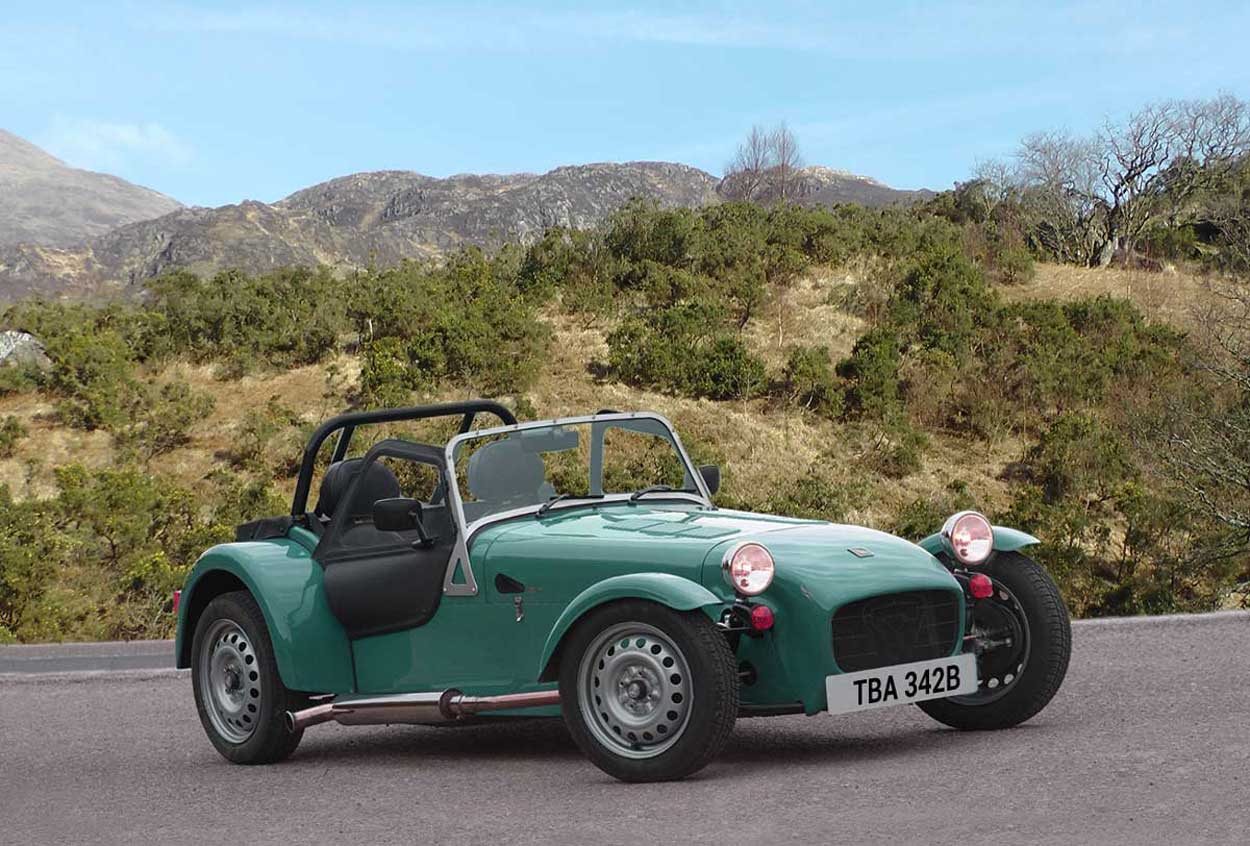 The Caterham 7, which is still being manufactured even though it was was launched way back in 1973, has a history going right back to 1957 when it appeared as a Lotus Seven.

Lotus Cars was run by Colin Chapman, a swashbuckling engineer and racing driver who was a firm believer in making performance cars lighter, rather than giving them bigger engines. He brought out the Lotus Seven as an inexpensive open topped two seater that could be used on the road or on the race track. It was not particularly fast; initially it just had a Ford 1172 cc side valve engine generating 40 brake horsepower so it's top speed was somewhere around 80 mph, depending upon how proficient at tuning the owner was.

Nevertheless it was very popular for club racing. It was easy to handle with good acceleration and cornering and most important of all it was fun to drive!

The Seven was sold as a kit car. Thanks to the vagaries of the British purchase tax system during the 1950s and 1960s a car that came in bits and pieces and was then assembled by the owner was anything up to half the price of a completed car so it was a very attractive proposition for those people who wanted to scream around a racetrack or drive around the roads in something different from the ordinarybut who couldn't afford something like a Ferrari, Lamborghini or Porsche!

All good things come to an end however and when, in January 1973, Britain entered what was then the European Economic Community tax rates had to change. There was no longer a benefit in selling kit cars and in any case Chapman wanted to move upmarket and had other more potentially profitable projects to go for. The Lotus Seven seemed doomed.

Step forward an erstwhile distributor of the Lotus Seven called Graham Nearn, who ran car distributorship Caterham cars in Caterham, Surrey. He felt that there was still a market for a car of this type and so he bought the worldwide rights to manufacture it (at least he thought he did. There have been a number of challenges to this since, and a South African court ruled that he hadn't).

One of the joys of what soon became known as the Caterham Seven was the fact that it could take different engines from the Lotus one that it first began with. That meant that racing drivers could enter it into several different classes and it has remained a favourite amongst the sporting fraternity ever since. A starring role in the opening credits of the cult film 'The Prisoner' of the late 1960s gave it some very useful free publicity and it still survives to this very day, although the company that builds it is no longer in the hands of Mr Nearn.